We’re pretty fine.. some days ago we were at The BBQ Store shop here in Verona for a little show cooking in order to promote the shop and – maybe – to help them to sell some smoker!

It’s been a great day as I “worked” with my bro William from 4Star BBQ Team (he’s the one on the left)! I can’t say I literally worked, it’s definitely been a pleasure for me to help our local bbq store and cook side-a-side with a great person and a great pitmaster like Will is!

First of all, PIZZA! We’re still italians, after all.. 🙂

It turned out pretty well, altough we literally burned one on our first try… We set our Weber Summmit at 250°C and we let the pizza stay inside for about 5′ (after pre-heating the pizza stone for about 30′ at the same T). It was crunchy outside and perfectly cooked on the inside! GREAT RESULT!

The store also provided us of a Big Green Egg XL, a Weber Performer 57 ad a Lotus Grill, so we decided to use them all to show some cool plates!

The BGE was used to smoke a couple of beer can chickens (about 2Kg each) and a dozen pork sausages. 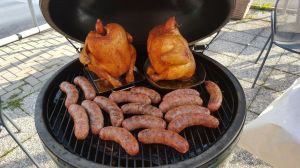 I had never used one before, it’s absolutely AWESOME! It keeps the internal temp stable for fucking days and it also have so much space inside you can almost cook yourself! WONDERFUL!!

Apple smoke, our chicken rub, a couple of hours at 150°T and you get what you were asking for: a crispy skin and juicy meat!! Sausages were very tasty and we managed to keep almost all liquids inside after putting them inside the Summit to make them crispier on the outside.

The Performer was used to smoke some baby backs (2h with apple wood), since we had enough time we decided not to foil them after smoking, so we kept going at 130°C til probe tender. 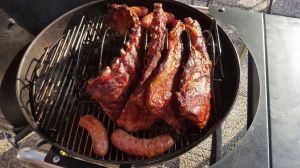 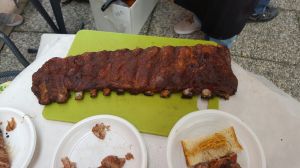 Unfortunately, we forgot about them for a while (some people kept asking us how the BGE works) and when we took them off the kettle they were a bit over..

Actually, only me and Will knew they were overcooked, all of our guests were absolutely happy and they all said they’d never tried ribs like ours, so we were quite happy too!

Last but not least, the Lotus Grill! 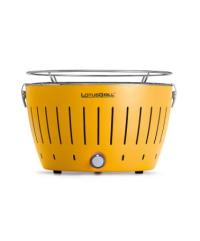 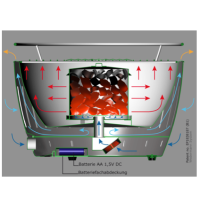 Since there were so many devices to work with, we decide to use this one for vegetables and make some bruschettas! Actually, we could have used it to cook some meat in direct way..

It’s a great device! It’s very portable and versatile (BTW, nothing compared to Weber’s Go Anywhere…..), it can be a solid solution for a pic-nic or for your patio if you don’t have much space!

In the end, it’s been a very fun day of smoke, beer and talk, the shop owner said me that a couple of person were going to buy a Summit (or something like that) so I guess we did out job quite well!

Keep on rockin, see ya!